Surviving war was more than battling gunfire for Dominic Palermo.

While Palermo spent nearly two months hospitalized after a shrapnel injury in July 1918 during the Second Battle Marne, he also suffered injuries as a result of exposure to mustard gas and later was considered shell-shocked.

After the war, Palermo helped charter the first American Legion post in the city of New Haven, according to his son, Nicholas, who later joined the same post when he became a veteran. 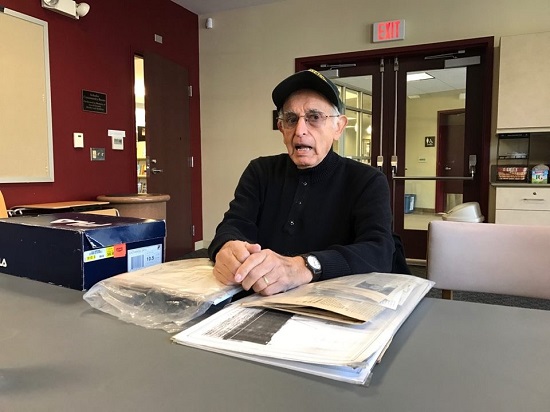 Nicholas Palermo looks over family documents related to the World War I service of his father and uncle.

“I followed his footsteps. I went into the Legion,” Nicholas Palermo said.

According to his military questionnaire, Dominic Palermo enlisted in the Army in March 1917 when he was 18 years old, and he served as a private in the 7th infantry, 3rd division.

Dominic Palermo was not the only member of his family to serve during World War I. His brother, Nicholas, joined when he was 16, and was killed in action when he was 18.

“[Dominic] was a tough guy and everything else, but 17 miles away from [Nicholas] when he got killed was what really got my father,” said Nicholas Palermo. “He couldn’t believe it. He wished he could have been closer. If he wasn’t fighting a tough battle at that time, he could try to get over there and see them.”

Dominic Palermo served for seven years, including his time fighting during World War I, receiving an honorable discharge.

“He gets discharged one day, reenlists the next day,” said Nicholas Palermo.

Nicholas Palermo served in the Navy during World War II. According to Nicholas Palermo, he enlisted when he was still in high school and got called for duty two weeks before graduating. He said his father’s military background helped spark his own interest in joining the service.

“What got me into the military, in my mind, my father was very active in military affairs. Because after the service, and so forth, he got involved a lot with that,” Nicholas Palermo. “He went to conventions, he was sort of an officer in his post. And they always had the big parades in New Haven, especially on Memorial Day. When I was younger it made me so military orientated. My father had me marching during Memorial Day parades with him.”