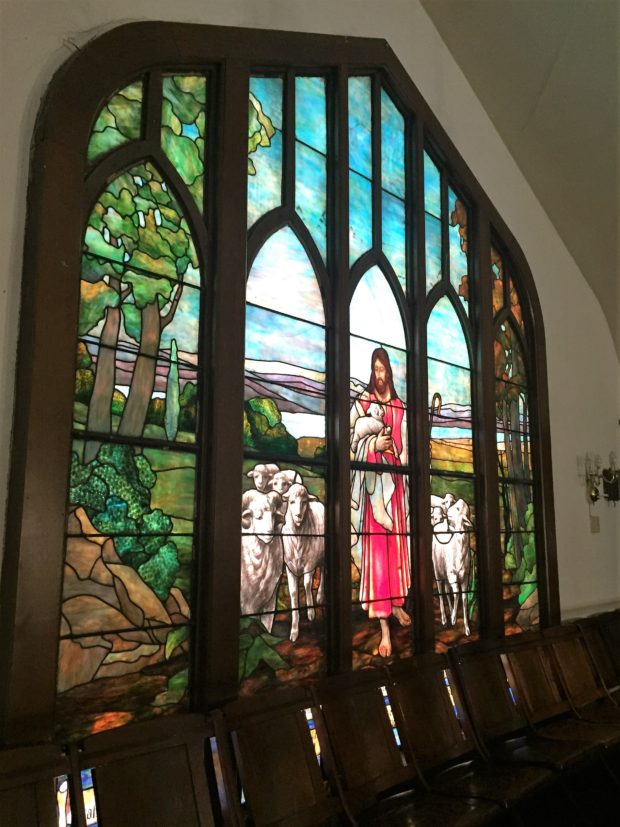 After soldiers of the Great War returned home in early 1919, the United States government, state governments, and local institutions began  commemorating the valiant efforts the men and women took to protect the nation. Throughout the nation, memorials such as statues, plaques, buildings, and signs were built to remember these brave men and women. One of these memorials was discovered by chance in Hartford, Connecticut; a rare stained glass window decorating the face of the North United Methodist Church. The stained glass window, was purchased by the Lamkins family to honor the memory of their son, a Hartford World War I soldier, Private First Class Walter Clifford Lamkins, who had fallen in France on October 24, 1918.

The stained glass window is located on the upper level of the church overlooking the nave. The window titled, “The Good Shepherd Giveth His Life for the Sheep,” encases the image of Jesus Christ holding a lamb surrounded with beautiful colors on 5 large glass panels.

Panels below the window bear the inscription:
“In Memory of Walter C. Lamkins,
who gave his young life for humanity;
Battlefields of France
October 24, 1918; age 22
101st Machine Gun Battalion” 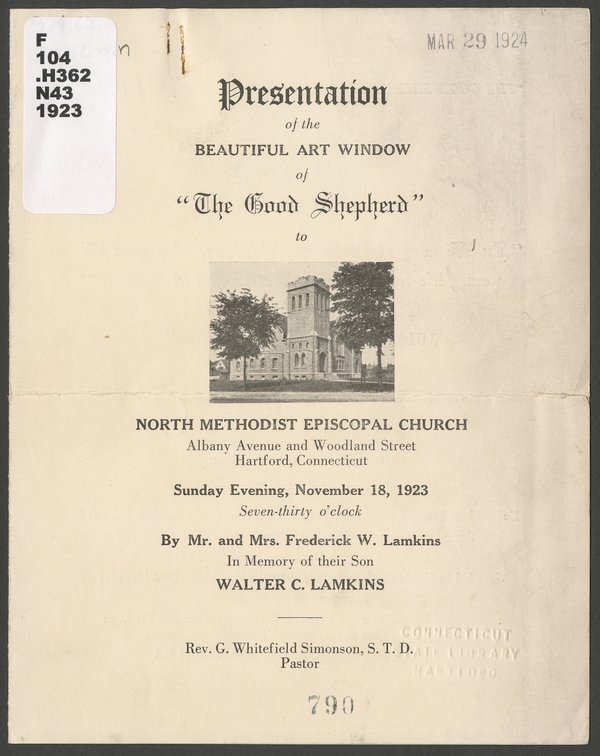 The window was given to the church (at the time was called the North Methodist Episcopal Church) by Lamkins’ father, Frederick W. Lamkins, a retired buyer at Sage-Allen, Inc. in Hartford, Connecticut and mother, Charlotte S. Lamkins. The unveiling of the window occurred on November 18, 1923 and was followed by a solemn ceremony. The church was filled with officers and members of the 101st Machine Gun Battalion, Rau-Locke Post of the American Legion, Women’s Relief Corps, and others. In the Connecticut State Library’s stacks, there is a copy of the ceremony pamphlet which contained the dedication program.

Found within the vast collection of the Connecticut State Library’s War Records was Philip Wainwright’s History of the 101st Machine Gun Battalion published in 1922 as well as Charles Yerrington’s A Memorial to the Two Hundred & Nine Men of Hartford Who Died in Service during the World War, 1917-1919 published in 1927. Both of which provided background information of Walter C. Lamkins. Walter was born on October 23, 1896 in Hartford. Before enlisting in with Troop L on May 10, 1917, Walter was a salesman for Flint Bruce Company, a furnishing store located in Hartford and was a member of the 1st Company, Governor’s Foot Guard. In 1917, Walter trained in Niantic, Connecticut, was promoted to Private First Class, and transferred to Company C of the 101st Machine Gun Battalion of the 26th Division, which joined the American Expeditionary Forces in England later in the year. On October 23, 1918, on his 22 birthday, Walter received wounds near the Meuse River, and passed away the next day. 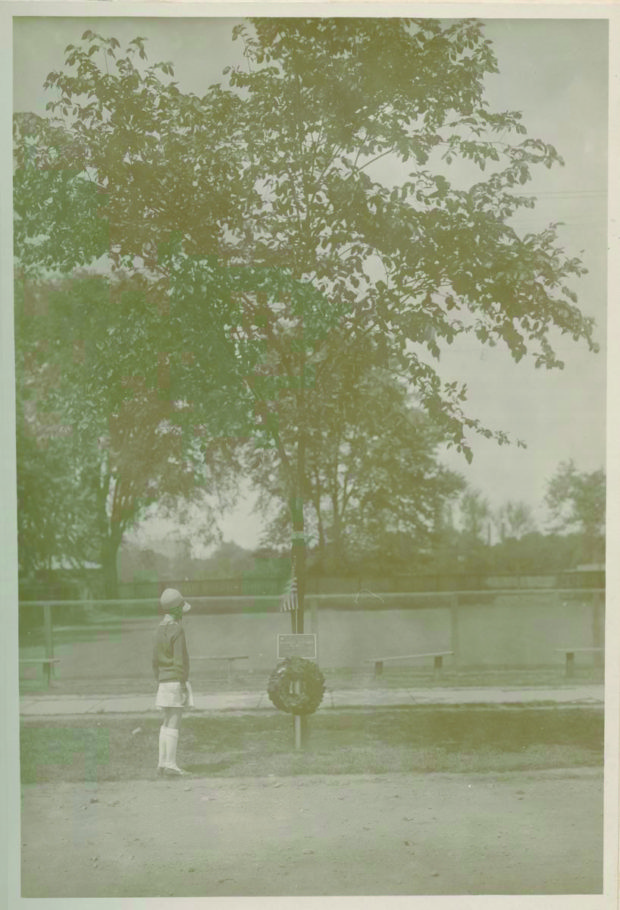 In recognition of Hartford soldiers’ heroic efforts in the Great War, Charles Yerrington, post commander of the Rau-Locke American Legion post, headed the American Legion effort to plant 209 elm trees in Colt Park. One tree with an inscribed brass plaque for each Hartford soldier that died in the war. Lamkins was one one of these honored soldiers. In the years after the war the citizens of the United States and Connecticut commemorated the heroic efforts of every courageous men and women who fought in the Great War with monuments and memorials of all shapes and sizes, yet many, like the ones in Colt Park are now gone. Many more are lost to memory but hidden in plain sight. Walter C. Lamkins’ memorial in the Hartford church is one of these hidden gems which deserves to have a second look.

We want to thank the congregation of the North United Methodist Church for allowing us to enter their beautiful sanctuary to photograph the Lamkins’ memorial stained glass window.