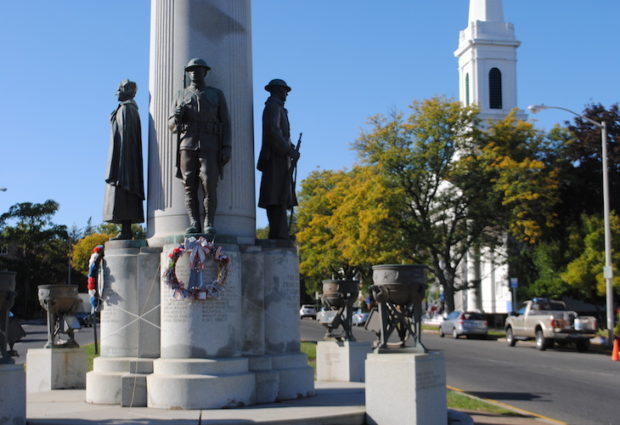 The World War I Monument at the intersection of Broad and East Main street had its dedication ceremony on Nov. 8, 1930, nearly 12 years after the last day of the war. Inscribed to the Vermont-Granite monument are the names of 84 fallen city troops. Pictured above are three of the four bronze statues that stand 6-feet, 6-inches tall above four granite pillars. “The Nurse,” is on the east side of the monument, “The Soldier” on the north side, “The Marine” on the west side, and not seen above is “The Sailor,” which faces South. (Oct. 10, 2016, Sandra Gomez-Aceves)

Sandra Gomez-Aceves, a journalism student at Southern Connecticut State University, reported this story as part of Journalism Capstone coursework on World War I.

The World War I Monument on Broad Street Memorial Boulevard can easily go unnoticed while driving down the busy intersection of Broad and East Main streets, but at one point the location was a prominent gathering place.

A World War I Memorial dedication program, dating back to Nov. 8, 1930, explains it was the parade ground of colonial days and where people gathered as Capt. John Couch marched away with the city’s first revolutionary soldiers. They were answering to the Lexington Alarm.

Mark Zebora, the Parks and Recreations director, believes the history behind the location caused the response local veterans had to a recent idea of his. 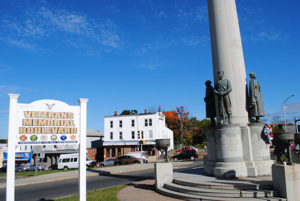 A view of the southern side of the World War I Memorial in Meriden, Connecticut. (Oct. 2016, Sandra Gomez-Aceves)

“I said we should move (the monument) to the Meriden Green,” said Zebora, “but that did not go over well with the veterans. I couldn’t sell that one.”

The World War I monument peaks at the north end of Memorial Boulevard, which now holds six other monuments. The boulevard is placed in between Broad Street, otherwise known as Route 5, and has two lanes on the eastern side and three lanes on the western side.

“I often say it’s so inappropriate to have it on a main area where you can’t go up and stand there and look and read it. On Broad Street you can get killed,” Zebora said.

The Meriden Green would have served as a calmer setting and would have given city residents more convenient access to the monuments as well, said Zebora.

“You drive 40 miles an hour down the street, you don’t even realize how beautiful it is,” he said.

Moving the World War I monument caused controversy among veterans as recently as a year ago. But even eight decades ago, the location and the monument itself put the city in a stir. 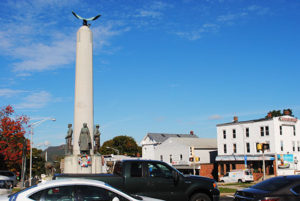 A view of the eastern side of the World War I Memorial in Meriden, Connecticut. (Oct. 2016, Sandra Gomez-Aceves)

It took the city 12 years after the end of the war to honor the fallen soldiers with the monument on Broad Street. The project overlapped about five different committees and approvals before its creation.

The World War I Memorial dedication program included each  proposal before the final one was chosen. The American Legion and the Veterans of Foreign Wars rejected a first, second and third proposal.

They instead proposed a $30,000 tall steel flag pole set on a star shaped granite base and surrounded by stone benches. The cost exceeded the $17,000 appropriation cost given by the Common Council and the location, on the City Hall grounds, seemed “inadequate,” details the dedication program.

It wasn’t until 1929 when Mayor Francis T. Maloney appointed a committee of seven aldermen, who he said had the duty of selecting a memorial design and a site for it as well.

Over the next couple of months more city residents joined the committee, totaling near 300 names that are all listed in the program. They helped with the ceremonies, organization, planning and parade.

By June 4, 1929, the committee voted on the current location of the memorial and by May of the following year, the final design was voted on.

The state and the city split the cost of the project because Route 5 is a state road. The entire cost of the monument and boulevard came at $106,000. According to Saving.org, that cost would compare to $1,457,500 in today’s dollar.

Zebora said the cost to maintain the monument is much less expensive now.

And while the monuments on Broad Street Memorial Boulevard won’t be moved in the near future, he has still budgeted for new island curbs.

“If we were to do anything, even cutting a tree we would run it by the veterans groups,” he said.

To see a full list of names on the monument, click here to view a PDF file.