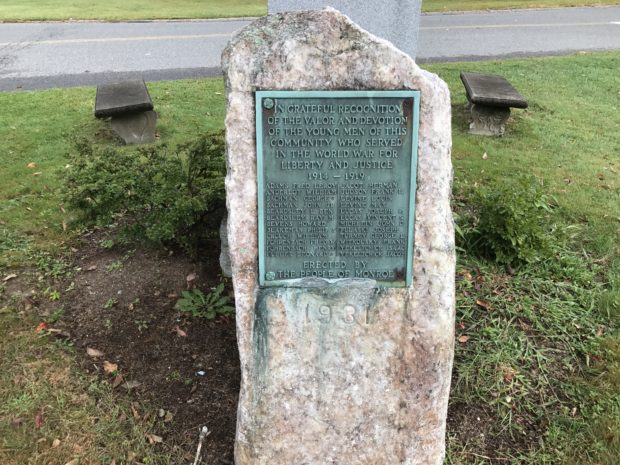 Alex Palmieri, journalism student at Southern Connecticut State University, reported this story in 2017 as part of Journalism Capstone coursework on World War I.

Two identical World War I monuments in Monroe are the result of a group of women who came together and saved their pennies for the cause.

The women met regularly during the war to knit, sew, make bandages, and paid at each meeting for their dinner. They took the balance and deposited it in a bank in Bridgeport, later paying for the bronze marker on the boulder at the entrance to Monroe Center.

The story of the patronage was discovered in 2017, when the town clerk found a hand-written letter in town archives, according to Kevin Daly, a local historian.

Daly has been involved with the historical society since 2010 and said the monument and letter are fascinating. The monument, a boulder with a plaque measuring 17.5 inches wide by 22 inches tall, is located at 610 Monroe Turnpike.

“This was a piece of history,” said Daly.

There was $1.50 left after paying for the marker that was used to buy flags to place around the boulder.

The note lists the women who made the tablet possible.

“It represents all men in Monroe that served in Europe from 1914-1919,” said Daly. “There are two names in the left-hand column with stars – these men perished during the conflict.”

There is also another monument of the same casting and measurements located in the Stepney Green, just three miles down the road at 428 Main St.

“I have studied two bronze plaques side-by-side,” said Daly. “They are identical in every way. From the names, to the size, to the features it looks to be the same exact monument.”

The Monroe Green monument is a little more worn down.

Daly said the design of the monument was minimalist. Daly added there is no record of any financial cost to create the monuments. 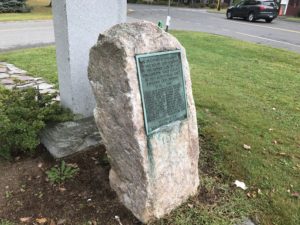 “This Monroe Green monument has so much history,” said Daly. “It’s the perfect sightseeing for Monroe.”