Emily Plavcan, journalism student at Southern Connecticut State University, reported this story in 2017 as part of Journalism Capstone coursework on World War I.

Seymour’s World War I monument was designed and built after World War II, and incorporates both veterans and war dead. Previously, World War I veterans were honored with a wooden marker at Town Hall.

In 1990, the monument, located at French Memorial Park on Spruce Street, was expanded to include stones and plaques for the Revolutionary War, the Korean War and the Vietnam War. The monument stands next to a large Civil War statue monument.

Out of the 322 names displayed on the World War I plaque, 12 represent residents who died in service.

One name, Emil Senger, was further honored when Seymour’s American Legion post was named after him, according to Marian O’Keefe, Seymour’s town historian. Senger was the first from Seymour to be killed during World War I.

O’Keefe believed that there may be some people’s names on the monument who lived in Oxford but had Seymour mailing addresses.

O’Keefe said that there is a flag at the American Legion that has all the names of the Seymour people who were killed in World War I.

O’Keefe said that she couldn’t find when the current monument for World War I was erected, but before there was the war monument in the park there was a wooden marker at Town Hall to honor them. 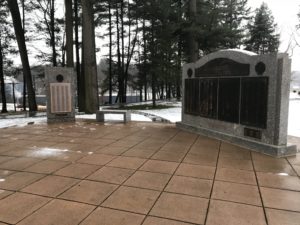 O’Keefe said: “There used to be a wooden marker down at the town hall with the soldiers I think from World War I, possibly World War II. Nobody seems to know what happened to it and there are no pictures of it.”

On the day of the dedication in 1990, around 500 people attended the ceremony, according to an Evening Sentinel article.

“As the 76th Division Army band played a medley of patriotic selections, memorial wreaths were placed at the base of each monument in the quadrangle,” according to an article from the Sentinel. 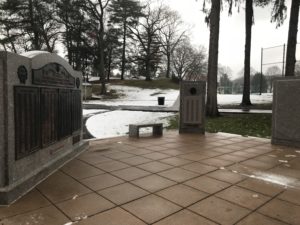 The Evening Sentinel quoted from a prayer read at the dedication: “Let the memorial grove be an enduring witness to future generations of the sacrifices of all those who served in time of war that they may not have served in vain.”