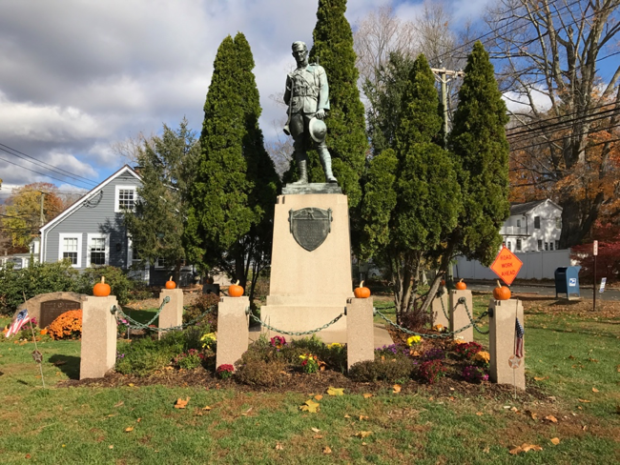 Chris Kuczo a journalism student at Southern Connecticut State University, reported this story as part of Journalism Capstone coursework on World War I.

The Westport Doughboy monument, on the town’s Veterans Memorial Green, is a fixture dedicated to the service of the town’s veterans of World War I.

Located across from the Westport Town Hall at the intersection of Main Street and Myrtle Avenue, the 18-foot-high monument includes a granite base with a bronze Doughboy statue. Also displayed on the monument are two bronze plaques listing the names of 234 people who served from town.

“It commemorates all of those who served from the town of Westport, and shows the increased involvement that we had in World War I,” said Sven Slander, head of archives and artifacts at the Westport Historical Society.

Nearby are other war memorials, including a World War II monument listing the names of 42 residents who died in battle.

The original monument was dedicated on Veterans Day in 1930. J. Clinton Sheperd, a World War I veteran and a member of the local American Legion Post, designed the monument, which was originally located at the intersection of Long Lots Road and State Street East in Westport.

“The Town Hall had run out of space in the old town hall, which happened to be the old Bedford Elementary school,” said Selander. “The Historical Society proposed to the town of Westport to buy the land, so it was decided that the monument would be rededicated closer to the new Town Hall.”

The monument was moved from the old green, that was also near the old Post Road, to its current position across from the Town Hall in 1986, and rededicated on Memorial Day 1988.

The Kowalasky Brothers Excavation Co. moved the monument from its original position to where it stands now, but had a degree of difficulty in doing so according to Selander. The company was concerned with setting it in place in the green next to the Town Hall without damaging it. With the statue being so massive, it was decided that they could set it on blocks of ice so they could control the rate it settled without damaging it.

“It’s much better here, because where it had been before was part of a divided highway, so people had to risk their lives to cross two lanes of open traffic to get to the old green,” said Selander.

To see a full list of the names on the monument, click here to open a PDF file.