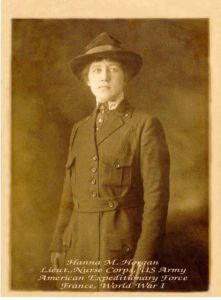 Her service to her country connected her with her future husband, U.S. Navy Cmdr. William P. Shea.

Horgan’s travels across the globe involved her service as a reserve nurse in the U.S. Army Nurse Corps during World War I, according to her military records and discharge papers dated to June of 1919.

Horgan’s grandson Ret. Col. William Shea remembers her as strong-willed woman, with whom he shared much of his childhood.

Horgan would serve in multiple Army units in France. However, the original identifying paperwork detailing her service was later lost in a large fire involving government records in St. Louis.

According to Shea, while Horgan was stationed in one of the field hospitals in France, an artillery shell hit the building. She was wounded in the shoulder and knee from the shrapnel. While only obtaining a minor disability from the incident, the Purple Heart did not exist at the time so she was not awarded one. Shea doesn’t recall if she ever received a wound stripe.

Shea believes Horgan had a 10 to 20 percent disability, adding it was not serious.

A sepia-tinted portrait shows Horgan in full nursing gear, short wavy hair, small glasses and a caring look while being stationed in France.

The two met aboard the U.S.S. Mobile, while transporting troops across the Atlantic. On a ship crowded with male soldiers, Horgan confronted Shea, who was the supply officer, and asked for more food for her nurses.

“At some point she wanted food, she found him some way,” Shea said with a grin. “Keep in mind that those ships were packed.” 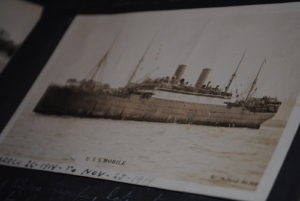 William P. Shea, an amateur photographer during his service throughout World War I photographed his journey through the Atlantic Ocean. Pictured is the U.S.S. Mobile, a troop transport where he met his wife, 1st Lt. Nurse Hanna M. Horgan.

Starting from that interaction, the two would keep in contact with each other. Horgan returned to Minneapolis after being discharged, where she lived with her uncle, who was also originally from Ireland. Shea continued his duties on the U.S.S. Mobile.

“I’m assuming she had to go back and explain [she was getting married.] He was her uncle so not doing that wouldn’t have looked good,” Shea said.

Horgan and Shea married in New York on Aug. 21, 1921 according to their marriage certificate.

Their grandson recalled stories of the two being opposites. Yet their connection aboard that transport ship built a marriage that lasted over 30 years and a resulted in the birth of three sons. 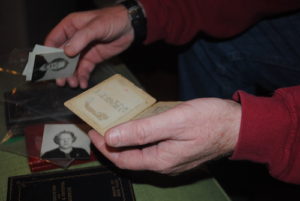 As of late 2016, Shea continued to pursue information detailing Horgan’s service in hopes of honoring her with a Purple Heart.