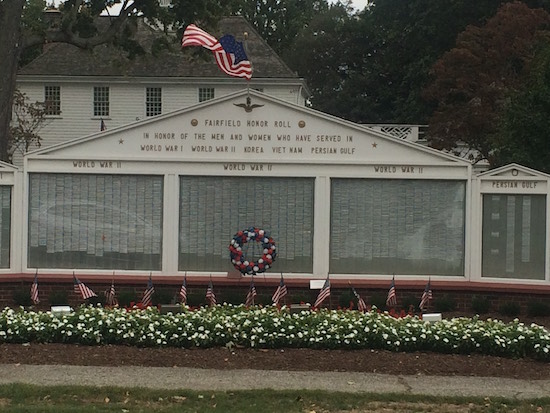 Philip Zoppi, a journalism student at Southern Connecticut State University, reported this story as part of Journalism Capstone coursework on World War I.

Unlike the usual stone or plaque monument, Fairfield’s Veterans Wall of Honor has moveable nameplates that allow for adjustments.

In the center of Fairfield’s historic Town Hall Green, hundreds of World War I veterans’ names are engraved on these plates. This tribute is part of the Wall of Honor, which honors veterans from Fairfield.

The monument honors veterans of seven wars, from World War I to the Persian Gulf.

To be put on this historic panel, proof must be provided that when a person joined the military, it was wartime and they were a Fairfield resident. Tom Dubrosky, chief of staff in Fairfield, decides whether a name is added to the wall.

“I have to review each submission to see if they qualify,” said Dubrosky. “This can get tricky. I have the final decision and I have to make a decision on who I think belongs on that wall and who doesn’t.”

If the person qualifies, the town produces and places a new nameplate.

Only one to two new nameplates are usually added each year, according to Dubrosky.

“World War I is finished, if there’s anyone I get it’s usually Vietnam,” said Dubrosky. “There’s no World War I guys left and very few World War II guys left. But, that doesn’t mean we don’t honor everyone on the wall.”

Dubrosky said the Wall of Honor could use an update. Nametags are fading, some to the point where they can’t be read anymore. This is especially noticeable in the World War I panel as several names are no longer visible.

There has been a war memorial on the green since 1794. Located inside Old Town Hall is a 1936 plaque that gives background on the evolution of this historic spot and its expansion in 1870.

“We’re about ready to start to review changing it,” said Dubrosky. “Regardless, it will still be in the front of (Old) Town Hall.”

Among changes suggested was restructuring the tribute into a walkway across the green, with nameplates on each side of it, accented by benches and flowers.

For any change to happen, the town would first need to secure the proper funding, Dubrosky said.

Update or not, the Wall of Honor needs care and maintenance during the year. The recent total annual cost, according to the Department of Public Works, was $2,150. That includes materials such as flowering plants and paint, as well as labor for any necessary repairs.

“We should always honor the veterans who served our country,” said Dubrosky. “There’s a certain pride that people get from seeing their names on there.”