Looking back, the planning of this program was an amazing feat. Having never planned anything remotely like this, we tried to have as many conversations and meetings we could with people who had. Then we had to struggle with a language barrier and 6 hour time difference with our colleagues in France. Who would be responsible for what? Would we do the travel planning ourselves or use a travel agent? And the biggest question – how do ensure the safety of our students?

After a bunch of email exchanges, it was time to really dig in. Project Director Christine Pittsley headed back to France for the Armistice celebrations and arranged to meet with Seicheprey mayor Gérard Andre and the rest of the French team. That meeting was one of the most amazing days. Rounding out the team was a group of local military historians, staff from the Communauté de Communes Mad et Moselle, staff from the Carrefour des Jeunes, and our interpreter Liz Coste. We met at the Seicheprey town hall for and set to work before breaking for lunch, and then off for a tour of the trenches and a visit to the Carrefour des Jeunes, a group accommodation in Beaumont where we would be staying. By the end of the day, we had set our dates (7-21 July 2019) and we were off and running! 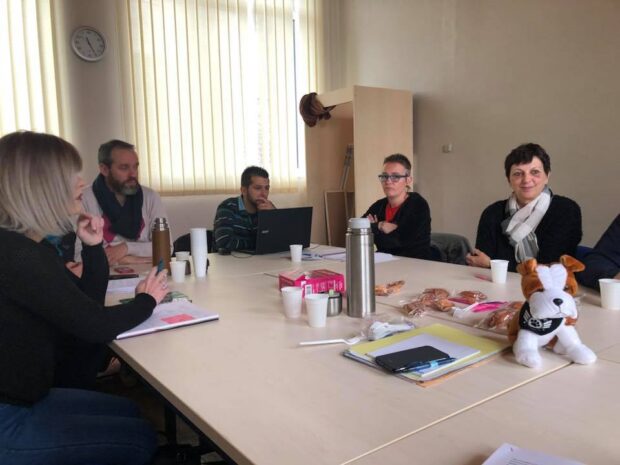 Planning for Digging Into History in Seicheprey, France. 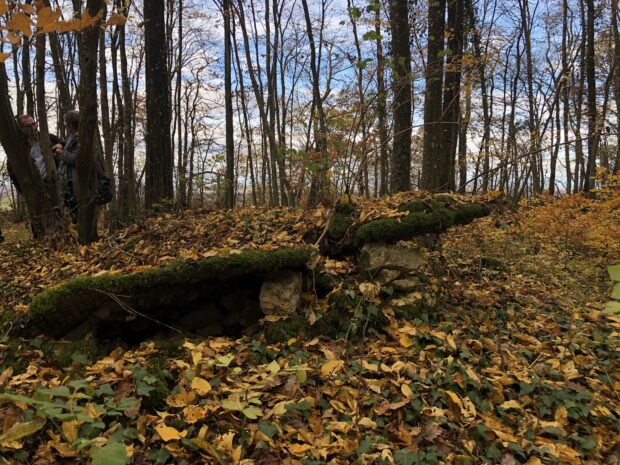 Remains of a collapsed abris (shelter) in the Bois du Jury. 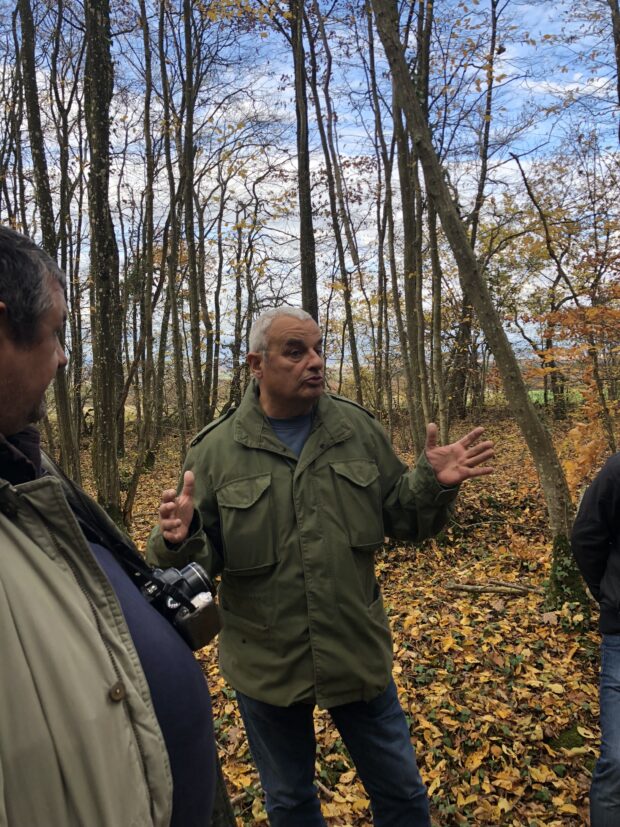 Phillipe Dourthe talking about the trenches in Bois du Jury. 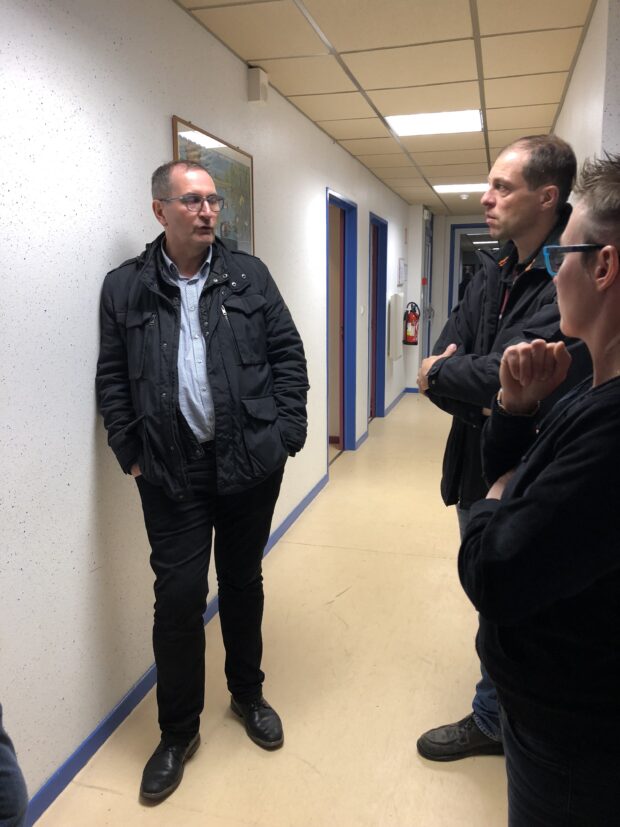 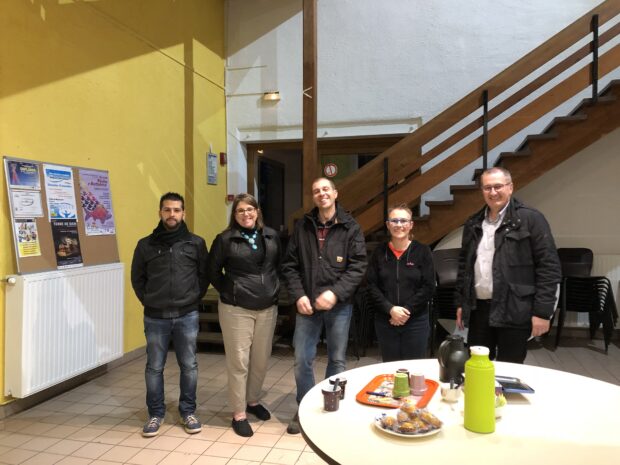 With dates in hand, planning got underway to recruit students, make travel arrangements, and all of the other pre-trip meetings we’d need to have. We had decided to use a student travel company to book our travel, our stay in Paris, and most importantly, for the insurance coverage, both medical and liability. We were quickly running out of time – we had about 7 ½ months before we were supposed to leave and so much to do.

After what felt like a thousand meetings later, it was time to start recruiting students. We had decided early on that we wanted to recruit students from across the state rather than from one single school. Bringing together students who didn’t know each other more closely emulated what it was like for the soldiers 100 years before. We also wanted to have as diverse a group of students as we could, but knew it would be difficult because the trip was expensive, so we did some fundraising to help offset the costs each student would have to pay. We did this by allowing donors to direct their donations to particular students, and we’re happy to say that folks stepped up, making it possible for all of our students to participate. You can see a list of the organizations, businesses, and individuals who donated here.

We had also decided to make the application competitive and limited it to students entering 11th or 12th grade in the 2019/2020 school year. One of our chaperones, Eric Johnson, a middle school history teacher at Park City Magnet School in Bridgeport, began designing the essay questions that students would have to complete. In addition to the essays, applicants were required to provide two recommendations from teachers or other community members. Upon submission, essays were stripped of identifying information, read, and scored by a group of educators, historians, librarians, and museum professionals.

Once the finalists were selected, we got to call each of the kids to let them know, and boy was it fun to hear the excitement in their voices! We had chosen an incredibly diverse set of kids, who had a whole range of interests, from history to French, and engineering to art. They came from all over the state and had different experiences and backgrounds.

We planned for four in-person meetings with the students to start some team building and get them ready for what would be a challenging trip. This wasn’t just about going to France for a good time, we would be working hard clearing trenches of 100 years of vegetation and debris. We wanted these students to experience history, not just learn about it from a book, so they were given an assignment. Each student had to find a soldier from their hometown who had fought at Seicheprey and research their life before, during, and after the war. We wanted the students to quite literally walk in their bootsteps while we were in France. 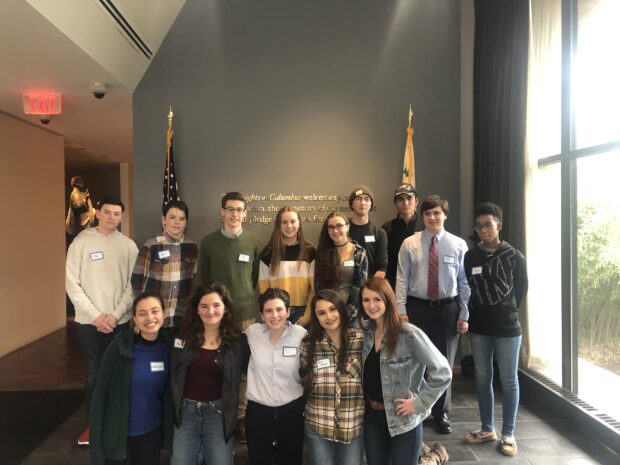 Digging Into History students at the Knights of Columbus Museum. 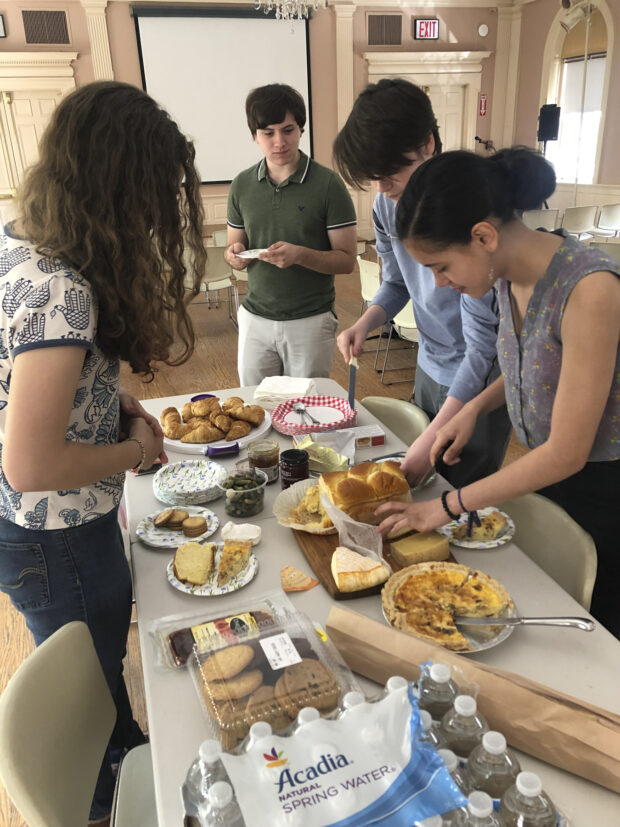 Students gather around a table full of French food at the New Haven Museum.. 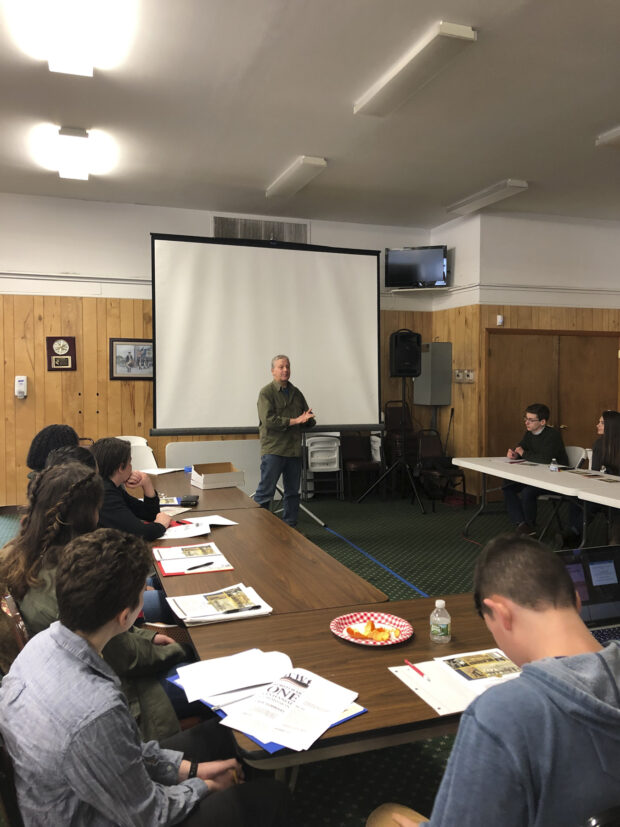 Our first meeting was at the Knights of Columbus Museum in New Haven. At the time, they had a brilliant WWI exhibition that included trenches complete with sounds and lights. This was our informational meeting for parents and students where we talked about the logistics of the program, schedules, paperwork – all the boring stuff. But, we got to watch the kids get to know each other, and through a few team building exercises, got to see some of their strengths and weaknesses.

The second meeting was probably the least favorite for the students. We met at American Legion Post #165 in Wolcott where we had pizza, learned about the history of Seicheprey, heard about the work of the United States World War One Centennial Commission from Commissioner John D. Monahan, and watched Peter Jackson’s They Shall Not Grow Old. While some of us geeked out watching this for the second or third (or tenth) time, a few of the students napped. The most exciting part of the meeting was hearing State Archaeologist Dr. Brian Jones talk about archaeology. Dr. Jones was supposed to accompany us to France, but he passed from a long battle with cancer just before we left, a loss we felt deeply.

Our third meeting was much more fun, and was run by our other chaperone, Kate Christolini, a French teacher from Simsbury High School. We met at the New Haven Museum for a meeting focused on French language, food, and culture. After some basic French lessons, discussions about etiquette, and an interactive activity on la bise (the traditional French greeting kiss), came food. First, we heard from Union League Cafe Chef Jean Michel Gammariello and Chef Jean Pierre Vuillermet who talked about French cuisine and what the kids could expect to try. Then we dug in to an assortment of goodies like confiture de mirabelle (mirabelle plum jam) with brioche, croissants, jambon de Bayonne, assorted cheeses, Quiche Lorraine, and some cookies. To wrap things up, we got to tour the Museum’s exhibit “Gilbert Jerome: New Haven’s WWI Aviator”.

Family Day, our last meeting was also the most special. A few weeks before we were ready to depart, we met at the Branford Armory, for Family Day. Students and their families, chaperones, WWI reenactors, current 102nd Infantry soldiers, and descendants of WWI soldiers who had fought at Seicheprey. We gathered to talk, learned about a day in the life of a doughboy, heard the students as they presented the research they had done on their soldier, and watched as Brigadier General McDonald, Assistant Adjutant General, Connecticut National Guard, presented Connecticut’s WWI medal to the descendants in attendance. As a special “treat”, our lunch was cooked by the re-enactors on a rolling field kitchen like what was used in France. What is a WWI lunch you ask, in this case it was slum (a stew of sorts), peaches, and bread. Talk about walking in a Doughboy’s footsteps!

There were some really touching moments too. Simsbury student Josh Picoult spent some time under the shade of a tent talking to Walter Matthews, a WWII veteran whose father had fought at Seicheprey. When Aaron Cohen got up to talk about his soldier Joe Roach, a smile came to John Dillon’s face. After the talks Mr. Dillon, whose father had been on the front lines during Seicheprey, told Aaron that Joe had been his father’s best friend and best man at his parents wedding. It was the perfect way to start our journey. 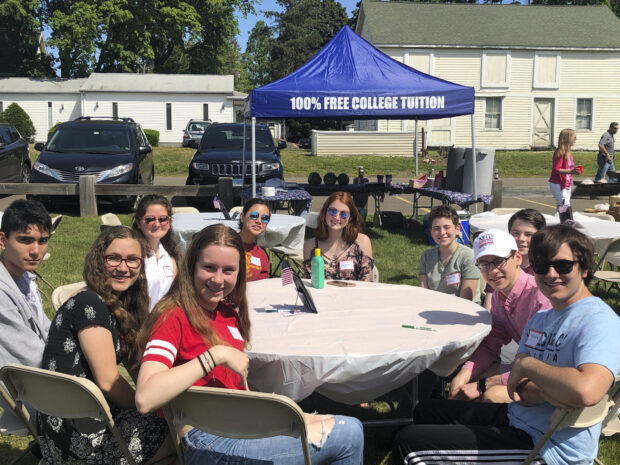 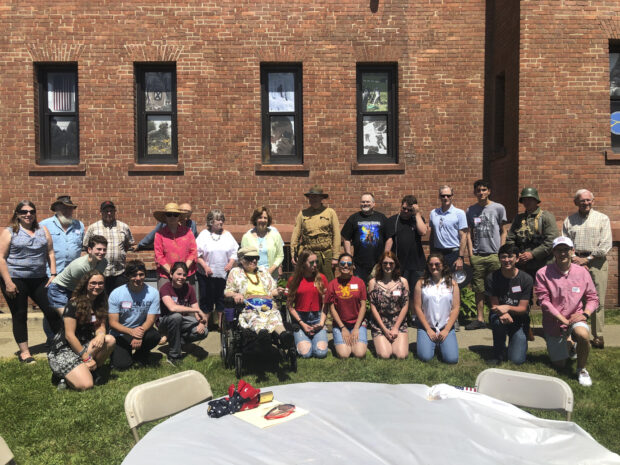 Students and descendants of 102d soldiers pose for a group photo at the Branford Armory. 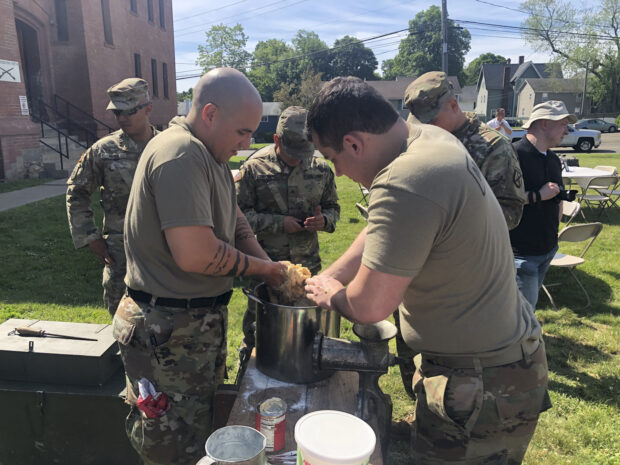 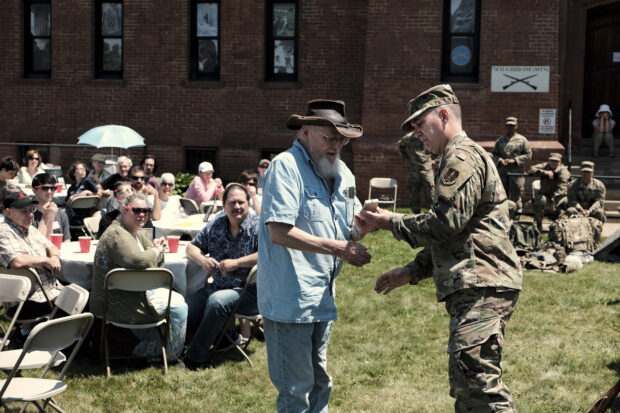 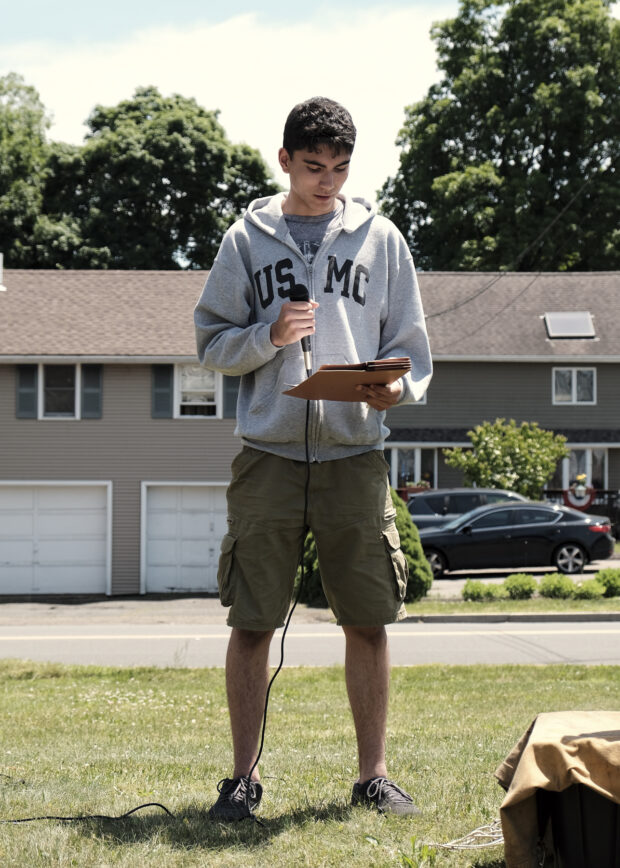 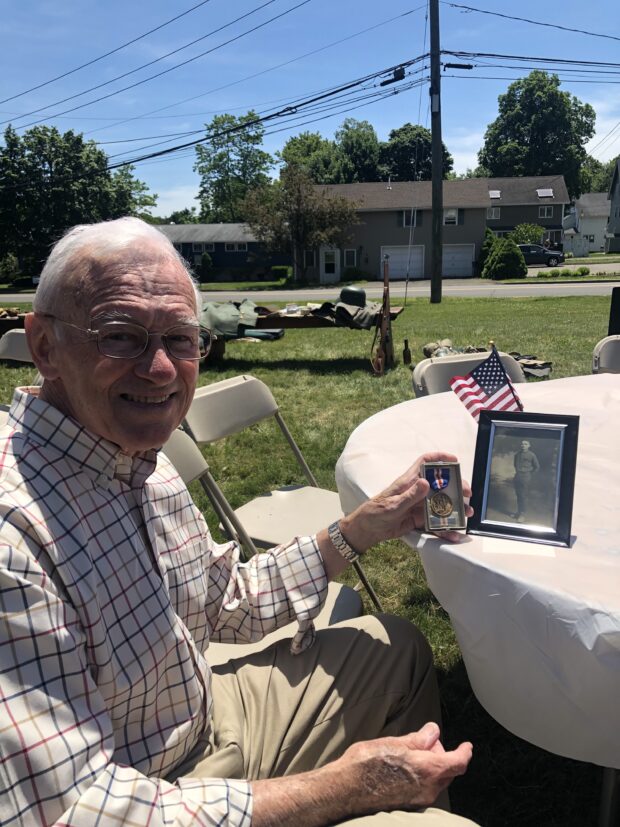 John Dillon with a photo of his father SGT John T. Dillon and a Connecticut Service Medal.

Up next – our journey to Seicheprey.